The third official estimate of Q2 GDP growth confirmed the UK economy grew by 0.7%, driven by the service sector and an expansion in consumer spending.

Whilst the 2008/09 recession remains the most severe in modern times, upward revisions issued by the Office for National Statistics (ONS) suggest the recovery was swifter than initially thought. As a result, UK GDP is now 5.9% above its pre-recession peak.

The British Chambers of Commerce has upgraded its UK economic growth (GDP) forecast for 2015 from 2.3% to 2.6%.

CPI inflation fell from 0.1% in July to 0.0% in August (see chart 1), well below the Bank of England’s target rate of 2%. With the recent pattern of very low inflation likely to continue over the next few months, there is little pressure on the Monetary Policy Committee (MPC) to start raising interest rates. Furthermore, the associated rise in real earnings will help consumer spending to support growth. 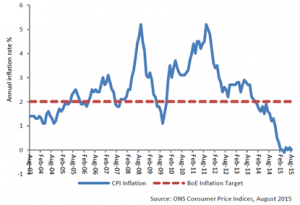 The Eurozone unemployment rate remains unchanged at 11% in July, the lowest rate since February 2012 but double that of the UK, which stands at 5.5%. The improvement in the Eurozone rates does however mast major disparities between member countries, with the highest jobless rate in Greece at 25.2% (see chart 2). 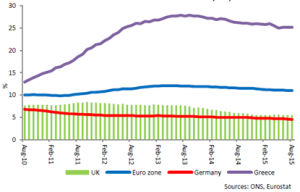 The Federal Reserve decided against raising US interest rates. Fears that a rise would exacerbate the current global uncertainty influenced the Fed’s decision. Historically, changes in UK interest rates have been closely correlated to movements in the UK and so when US rates do start to rise, there is an increased probability that they shall do so in the UK also. The British Chambers of Commerce expect UK interest rates to rise to 0.75% in Q2 2016.

Since our last update there have been some early signs of renewed momentum in risk assets, with U.S. high yield bonds returning about 2% and global equities (as measured by the MSCI All Country World Index) rising by 1.7% in dollar terms, hitting a new record high at the time of writing. This has largely been driven by the strong performance of Emerging Market equities, and to a lesser degree developed European equities, while U.S. equities have been roughly unchanged. Asian equity strength has been partly driven by Chinese policy loosening, but a pause in the U.S. dollar’s uptrend has also been a driver, and this, (according to analyst consensus), is likely to be proven transitory once the U.S. economy comes out of its recent soft patch. Meanwhile, the combined impact of the European Central Bank’s (ECB) and Bank of Japan’s bond buying programmes has seen government bond yields fall to record lows across the euro area and move moderately lower in both Japan and the U.S. At the time of writing, German 10 (bps), while the U.S. equivalent yields around 1.9%.

News this week was that Fidelity Funds Network have been... END_OF_DOCUMENT_TOKEN_TO_BE_REPLACED