Final Salary schemes, which are generally generous in other regards, have been exposed to a tax-free sum cap since 1987; Personal Pensions which account for most savings outside the public sector had no tax-free lump sum cap prior to April 2006 (though contributions were restricted), and a cap of 25% of the standard lifetime allowance came in on 6th April 2006.

The graphic below (followed by a table) shows how the tax-free sum has fallen from the unlimited value to its lowest point from 6th April 2014. Given there have been, by my reckoning, seven changes in six years, maybe we could just leave pensions alone for this autumn statement and budget? 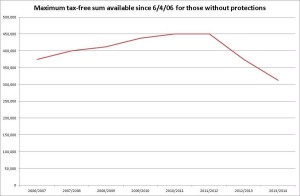 We regularly give advice to individuals, who as part of... END_OF_DOCUMENT_TOKEN_TO_BE_REPLACED

If it is important to you what happens to your... END_OF_DOCUMENT_TOKEN_TO_BE_REPLACED