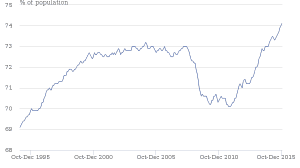 Unemployment is at a historic low and is back to its pre-downturn average. Nominal and real wage growth have both eased a little in recent months, although the ONS state this may in part reflect rising job flows into low-skilled occupations.

Headline Consumer Prices Index (CPI) inflation rose marginally in January 2016 but remained well below the official inflation target of 2%. The low level of inflation over the past year has been primarily due to falling prices for energy, which appears to have fed through to prices for fuel in transport, and food. The appreciation of sterling during the first half of 2015 also served to hold down import prices, which has its biggest impact on imported raw materials, energy and some manufactured goods. 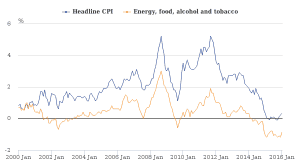 Year-on-year retail sales growth (excluding fuel) for the 3 months to January 2016 – around the Christmas period – weakened from 5.5% in 2015 to 3.3% in 2016. The growth in retail sales, excluding fuels, came from predominantly food stores, non-specialised non-food stores, household goods stores and non-store retailing, so fairly broad-based.

Markets are likely to remain volatile and investors will be nervous until things stabilise. The US and the UK economies look broadly positive, and should (subject to the risks above) continue their modest trajectory of growth and the European and Japanese ‘green shoots’ should continue.

On 3rd December 2014, the Chancellor, George Osborne, stood up... END_OF_DOCUMENT_TOKEN_TO_BE_REPLACED