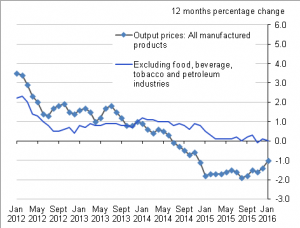 Month on month the output price measure for all manufactured products decreased 0.1% between December 2015 and January 2016, compared with a decrease of 0.3% last month.

The “narrow” output price measure, which leaves out volatile sectors, showed no movement in the year to January 2016, compared with a fall of 0.1% in the year to December 2015. 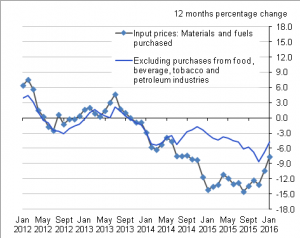 Month on month, the input price measure of UK manufacturers’ materials and fuels, fell 0.7% between December 2015 and January 2016, compared with a fall of 0.3% last month.

Global growth, currently estimated at 3.1 percent in 2015, is projected at 3.4 percent in 2016 and 3.6 percent in 2017. The pickup in global activity is projected to be more gradual than in the October 2015 World Economic Outlook (WEO), especially in emerging market and developing economies.

In advanced economies, a modest and uneven recovery is expected to continue, with a gradual further narrowing of output gaps. The picture for emerging market and developing economies is diverse but in many cases challenging. The slowdown and rebalancing of the Chinese economy, lower commodity prices, and strains in some large emerging market economies will continue to weigh on growth prospects in 2016–17. The projected pickup in growth in the next two years — despite the ongoing slowdown in China — primarily reflects forecasts of a gradual improvement of growth rates in countries currently in economic distress, notably Brazil, Russia, and some countries in the Middle East, though even this projected partial recovery could be frustrated by new economic or political shocks.

Risks to the global outlook remain tilted to the downside and relate to ongoing adjustments in the global economy: a generalized slowdown in emerging market economies, China’s rebalancing, lower commodity prices, and the gradual exit from extraordinarily accommodative monetary conditions in the United States. If these key challenges are not successfully managed, global growth could be derailed.

If you own a second home, you might want to... END_OF_DOCUMENT_TOKEN_TO_BE_REPLACED