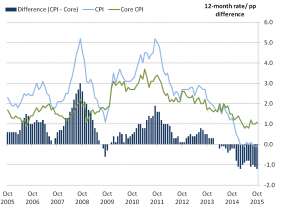 Households have seen the prices they pay for goods and services remain largely unchanged over the last year. The Consumer Prices Index – which measures changes in prices – fell by 0.1% in the year to October 2015. This means that a basket of shopping that cost £100.00 a year ago would cost £99.90 now. This is the same rate of inflation as seen in the year to September and continues the trend of negligible inflation that the UK has experienced since the start of 2015.

In making financial and economic decisions, it can be useful to consider what the rate of inflation will be in the future. One way that analysts attempt to do this is through excluding certain goods with volatile price movements from the rate of inflation. This measure is often referred to as “core” inflation – though this does not imply that these products are more or less important than others.

For most of the last 10 years (a short period in 2009 notwithstanding), core inflation has been lower than overall inflation. Since spring 2014, this picture has reversed due to the prices of many of the goods excluded from core inflation (notably motor fuel and food) falling.

We’re just waiting on the final rules that will allow... END_OF_DOCUMENT_TOKEN_TO_BE_REPLACED

Just because something is legal, it doesn’t mean it’s a... END_OF_DOCUMENT_TOKEN_TO_BE_REPLACED